Earlier this year the large water oak in our backyard died.  The tree has been terrifying me as I had visions of it crashing down on our home during a tropical storm.  In fact, we rode out Hurricane Barry at my wife’s sister’s house because I was certain the storm would bring this guy down.

Thank goodness that Hurricane Barry was a dud! 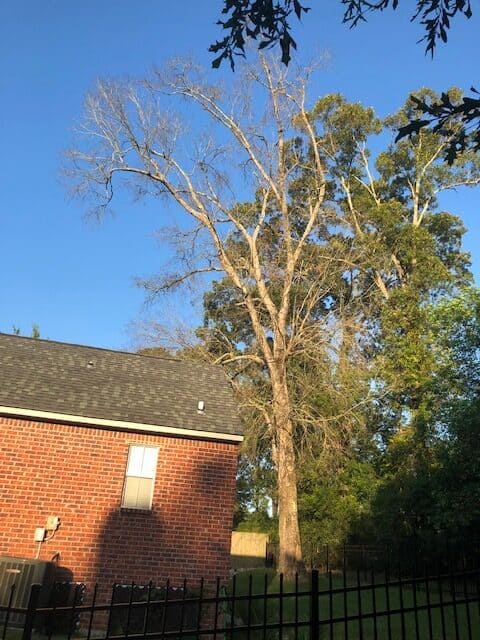 While the dead oak scared me there were a few things about it that I enjoyed. The insects that invaded the tree had been wonderful for attracting woodpeckers to our yard.  The tree still had an active squirrel nest and I kept a squirrel feeder on the tree to keep myself and the dogs entertained.

It took a long time to find a tree removal company that was willing to take this tree down for us.  The problem was that everyone wanted to use a crane to take the tree down but our neighbors would not allow access for the crane on their property.  The company that finally did the job for us solved the problem by using a massive 75 ton crane that could reach the tree without touching the neighbor’s property. 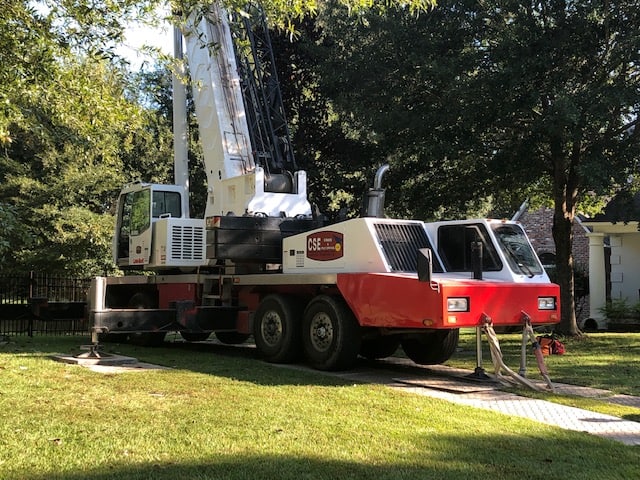 It was a blast watching the crew work.  The crew got into top of the tree, would attach straps from the crane and then cut the tree down limb by limb.  The guys in the tree are technically called “Climbers” but it looked like they thought it was easier to ride the crane into the tree than actually climb it! 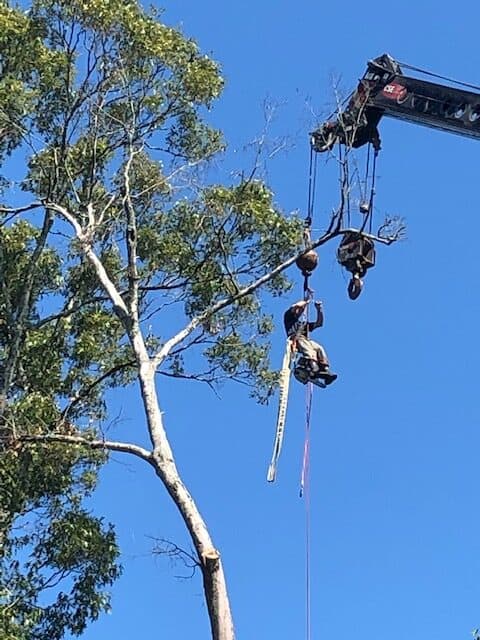 Every now and then the guys would drop some small to medium sized branches on my deck but no damage was done.  The other thing I was pleased with was that since they were using the crane they were not doing any damage to our yard that we had professionally landscaped earlier this year.  They did end up moving some of my precision tuned lawn sprinklers but it will be easy to get those set back up again.

It was interesting to see the variety of chainsaws these guys were using.  They had some with massive cutting bars but I thought the neatest ones were the “Pole Mounted” chainsaws with smaller cutting bars that they used for precision work.  While I don’t need a professional limb trimmer like they were using I might have to look into getting a version of this pole mounted saw for a little trimming on the trees in the front on my house. 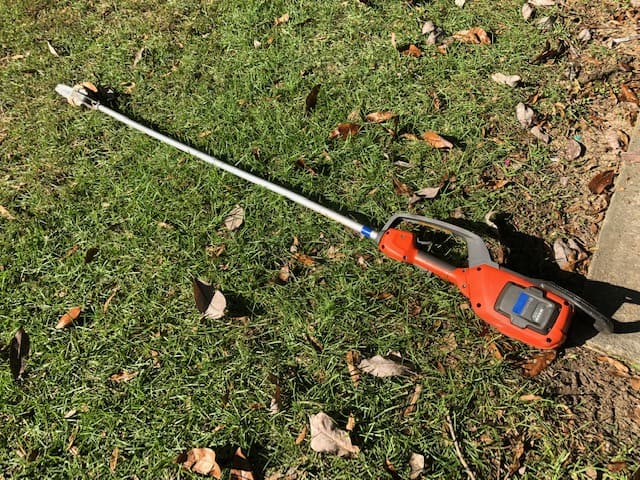 The whole process went much faster than I anticipated.  It only took the crew about six hours to get down to the final cut on this massive beast. 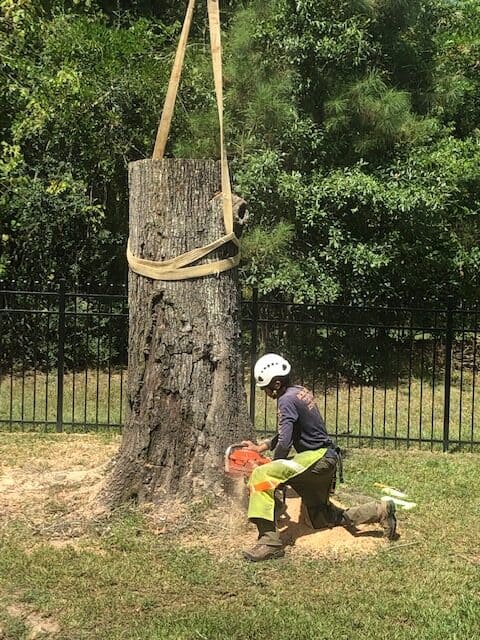 Once the tree was cut down to the stump they broke out another cool tool…a remote controlled commercial stump grinder! 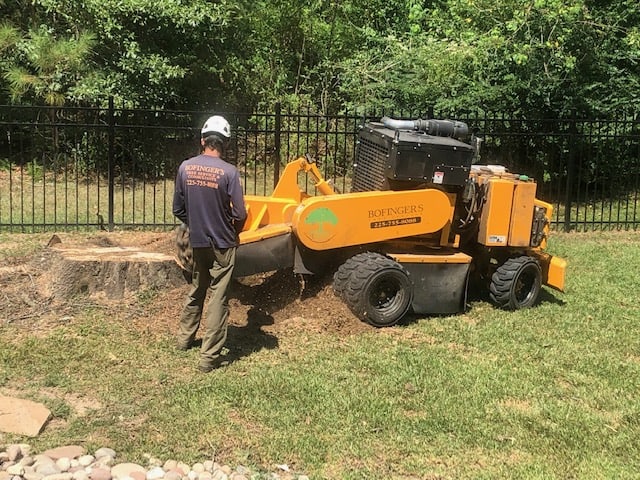 The commercial stump grinder turned the massive stump into a giant pile of sawdust in about 30 minutes.  It was impressive watching the blade simply shred the stump to pieces.

What To Do After Tree Removal?

I am delighted that the dead oak tree is gone.  However, the absence of the tree has introduced a new set of projects and problems.

How To Grow Grass After Stump Removal

I have a giant sawdust patch in my yard that my dogs are loving but, honestly, is not that attractive.  I would love to throw down some sod but have figured out that getting grass to grow there will not be an easy task.

Apparently the wood chips are going to utilize a tremendous amount of nitrogen from the surrounding soil as they decompose.  This will create a nitrogen deficiency that will hinder anything from growing there.  From what I have read it will take about two years for the complete decomposition to occur.

If I don’t want to wait that long…and I don’t…then I am going to need to dig out the sawdust and replace it with topsoil.  I have to be honest, that job sounds hot and miserable and is not something I plan on doing myself.  However, after getting the tree removed, having the yard landscaped, adding a deck rail and putting up a new fence I am putting any new major spending projects on hold for a while.

That big oak used to provide a lot of shade that helped keep my deck and back porch cool.  I pretty much live and work exclusively on my back porch so the loss of the shade is kind of a big deal.

I am going to look into adding some type of Sun Sail or other form of artificial shade.  I might end up investing in some better fans for my porch.  We have tried using a portable outdoor air conditioning unit in the past but it was expensive and not very effective so I think I will skip that option.

One benefit of losing the shade is that now I can start using some solar powered deck lights or solar powered lawn lights for a little evening accent lighting.  It should be fun to see what my options are there.

That big oak was perfect for woodpeckers and squirrels and I do not have a way to replace that habitat for them.  I have been thinking about sneaking over onto the woods that are on my neighbor’s property and sticking up a few squirrel houses to make up for the nest my squirrels lost.  It will be a while before it is time for the squirrels to have babies and need more shelter so I can wait a while to figure this one out.

I can always add a few more woodpecker feeders to keep the red headed woodpeckers visiting but I wish that I could offer them some shelter as well.

Change is a constant and back yards are no exception.  Taking down that oak created massive change in or yard and it will be interesting to see how we adjust to the new conditions.

I know that it is impossible to stop change but I sure am going to miss watching the squirrels chase each other all over that tree.