We have a simple wood deck that extends off our back porch.  Through a series of random events we ended up needing to give it a good cleaning before we applied a new coat of waterproof stain.  So, how do you clean a wood deck?

Brush away large debris and then clean with a power washer making sure the washer settings do not tear up the wood.  The power washer will remove almost all of the surface dirt and mildew. To finalize the cleaning and brighten the deck use a long handled brush to scrub the deck with a bleach based commercial deck cleaner. 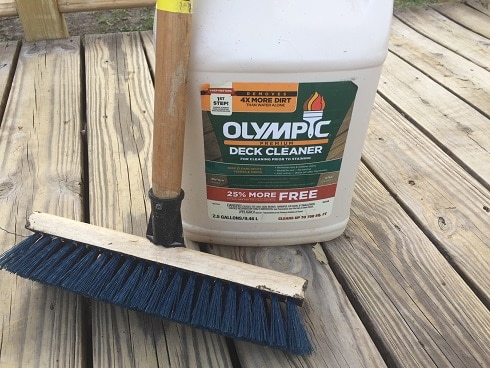 So, how did we get into this situation?

The deck, which we have had for about five years, is, at its highest point, about 24 inches off the ground.  A deck of this height, according to the local building codes, does not need a protective guard railing.

The jerkwads from State Farm sent an inspector to perform a random audit on our home.  The auditor said that, for insurance purposes, the protective guard railing was mandatory and that if we did not have one installed they would cancel our homeowners insurance.

So, after a lot of bad feelings and $3,000 later, we had a brand new deck railing that we didn’t really want. 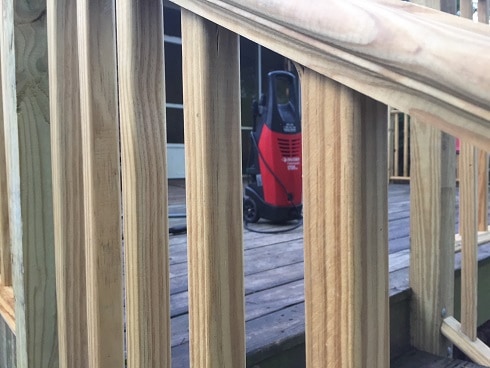 But hey, the railing was in place and rather than be pissed off we decided to make the best of it!

The contractors put up a nice looking guard rail but the wood was raw, brand new and untreated.  The look of the new rail was in stark contrast to the dirty and dingy deck that we had gotten used to looking at.  It was obvious at this point that we were going to need to clean our old deck and then apply a waterproof stain to both the old deck and new rail to protect our investment ad make everything look the same.

The first thing we had to do was get rid of all of the debris on our deck.  We have a large oak tree in the backyard so the deck was absolutely covered in acorns and leaves.  I started out using a rake and brush to clear everything off but, as soon as my wife made the very wise suggestion, switched over to her gas powered leaf blower.

I borrowed an electric power washer from my Brother in Law for this round of cleaning.  The power washer was a Husky 1750 psi model and it was perfect for the job. 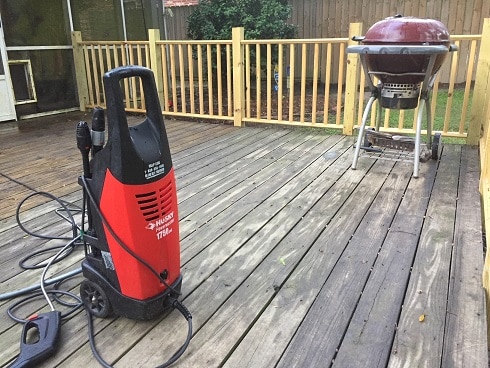 The power washer had a wand that provided a wide spray that worked in a circular pattern.  While it was not as efficient as cleaning as some as the straight jet power sprays you would use for cleaning your driveway it did make sure that I didn’t shred the wood to pieces as I was getting it clean.

When you are power washing wood you really are looking for the Goldilocks setting.  Not too powerful but just powerful enough. 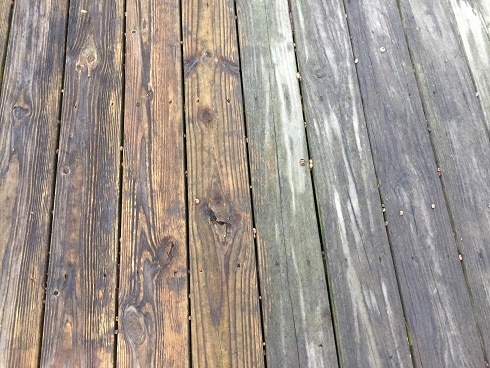 I did a little research and discovered that what I needed to do at this point was hit the wood with some cleaning chemicals that are used in commercial deck cleaners.

Before I started this project I had no idea that commercial deck cleaners were available.  It turns out that these are the secret sauce and the final step for brightening the wood and getting rid of the last traces of mold and mildew.

I went with Olympic Deck Cleaner because I trusted the brand and it was on sale for 50% off at Lowes.  Those might not be the best buying criteria but you work with what you have got!

The Olympic product is a concentrated bleach solution that needs to be diluted before use.

I roughly followed the instruction, diluted the product in a large bucket, and used a long handled brush to scrub the mixture onto the deck boards.  I let the solution sit for 15-20 minutes and then sprayed it off with a garden hose.

Wow!  This stuff was the BOMB! 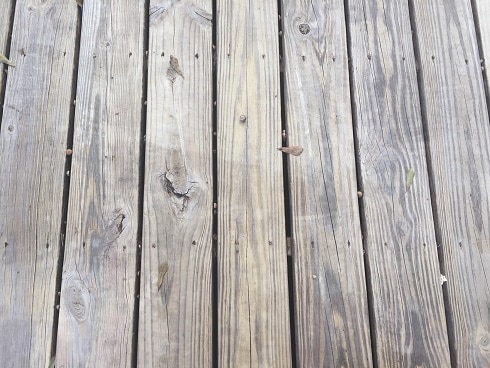 After the deck dried for a couple of days we went ahead and gave it a coating with a Red Cedar colored protective coating of Thompson’s Water Seal (on sale at Home Depot for 80% off) and we were good to go!

Should I Have Sanded the Deck?

I watched a lot of YouTube videos of refinishing wood decks and a lot of them took the time to sand the deck after it had been cleaned but before the new coat of water sealing stain was applied.

In the end I decided that I wasn’t going to sand my deck because it was too hot to sit out there and use my little orbital hand sander and I was too lazy and cheap to go rent a larger stand up sander from Home Depot.

Instead, I spent some extra time inspecting each deck board and hammering down any nails that were starting to stick their heads up.  None of the boards looked very rough or splintery so I felt pretty comfortable skipping the sanding step.  I might include it next time though.

What I Learned When I Did More Research

I did this project on the cheap using a borrowed pressure washer and buying whatever cleaner and water seal was on sale.  After I was done I sat down and did some research to figure out what I could or should have done different.

There are four primary categories of deck cleaner that are based around the chemicals used in the cleaning formulation.

The Olympic deck cleaner I used was a bleach based product and this is the most common type of cleaner.  The active component in bleach is sodium hypochlorite which has a “slimy” feel.  By the way, if you touch this stuff you really need to wash your hands.

Since the cleaning mechanism is purely chemical there really isn’t a need to scrub this product into the wood like I did.  Most bleach based cleaners can be sprayed on and then removed with a hose.

Bleach based cleaners are unrivaled when it comes to removing mold and mildew, two of the most common deck issues.

Bleach based cleaners can be rough on your plants.  To protect any plants around your deck it is recommend to spray the plants with water and then cover them with plastic sheeting before using the cleaner.

You can find several deck cleaning products that are based on what the label calls “Oxygen Bleach”.   Oxygen Bleach is a simplified marketing term for hydrogen peroxide which readily splits into chemical reactive free radicals.

Phosphates form the backbone of really great detergents which make TSP based cleaners spectacular for removing grease and stains.  TSP is also aggressive toward paints so if you use this type of cleaner then you will end up needing to re-stain your deck.

TSP is not particularly effective at tackling mold and mildew so you will often find products that are a mixture of bleach and TSP.  While this might look like the ultimate cleaning combo you need to realize that it carries the health hazards and plant damaging properties of both chemical and appropriate protections.

Some products, like Thompson’s Water Seal 3 in 1 wood cleaner have oxalic acid as the primary cleaning ingredient. Think of oxalic acid as vinegar’s bigger badder brother. 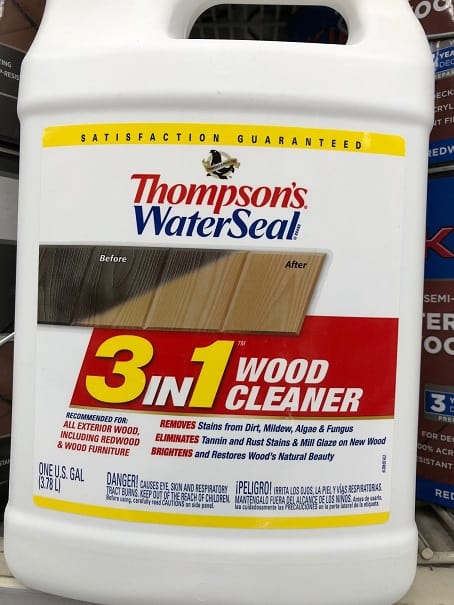 One interesting property of oxalic acid is that it is great for complexing with iron to form water soluble compounds.  If you are dealing with rust, etc then an oxalic based cleaner is the way to go.

Safety Notice: Do not ever mix an oxalic based deck cleaner with a bleach based deck cleaner.  This would essentially be mixing an acid with a base and you will generate a lot of heat and potentially toxic gases.

So What About The Happy Ending?

After the rail was up my business partner from The Squirrel Shop found a great design for a deck mounted bird/squirrel feeder!

The feeder slips over a standard 4 inch deck rail and can be snugged up and securely held with a simple screw that presses onto the rail.

I fill the feeder up with about two cups of sunflower seeds or shell on peanuts and the cardinals and squirrels come right up to my deck and spend the day hanging out!  It is a pleasure to have swarms of birds on my deck…even if there is a bit of a mess to tend to at times 🙂 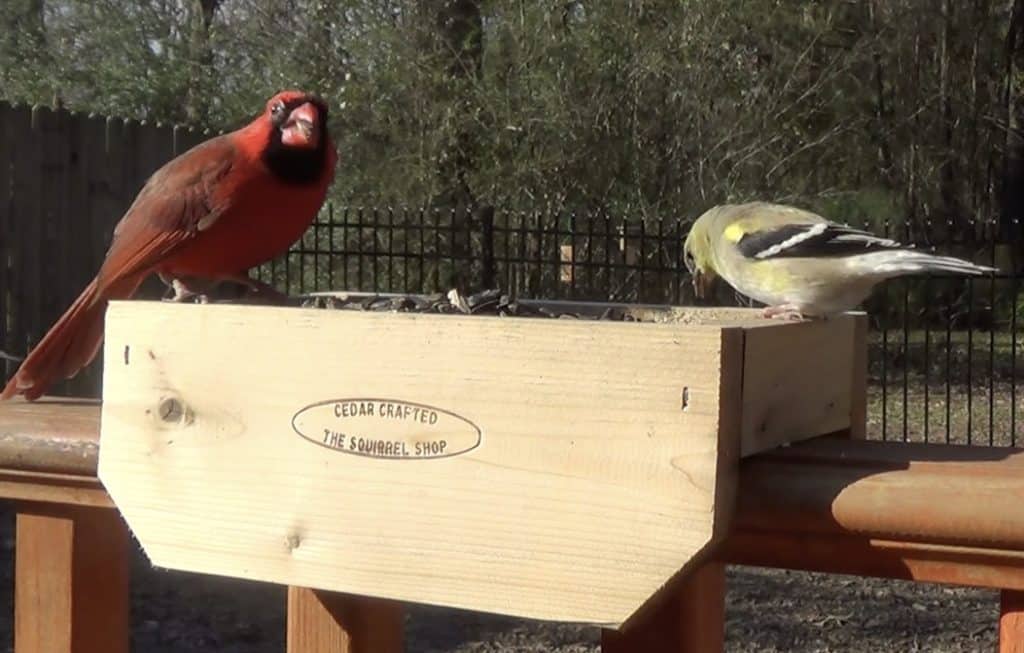 All in all I really enjoyed the whole deck cleaning exercise and learned a lot in the process.  I hoped you learned a little while you were reading along!